To me, Valentine’s is about making things yourself. I don’t remember what I did growing up, but these days I’m all about making my own stuff. One year I made miniature cards with various donuts on the front and “I donut know what I’d do without you.” Last year I made a Harry Potter themed box for receiving Valentine’s when I worked with 3rd graders. This year, it’s peach-themed postcards! As adults, we rarely receive fun mail (or Valentine’s cards), so I thought it would be fun to make some postcards. I love strangely sized and shaped cards, so I didn’t want to need to worry about custom envelopes. That’s why I went with postcards — simple, easy to mail, and fun to receive!

So here’s a DIY for how I made the cards, just in case you want to send a friend something fun! I started with white cardstock, cut to be 4.25″x6″.  The requirements according to USPS for postcards are the card must be rectangular, between 3.5″ and 4.25″ high and between 5″ and 6″ long. The thickness must be between than 0.007″ and 0.016″. I’m not sure what my paper’s thickness was, but it mailed so I guess it was fine!

After cutting your cardstock to the required size, measure about two inches in from the right and make a vertical line from the bottom, measuring about 3 inches. This will separate your message space from your address space. Then turn the paper over to begin designing! 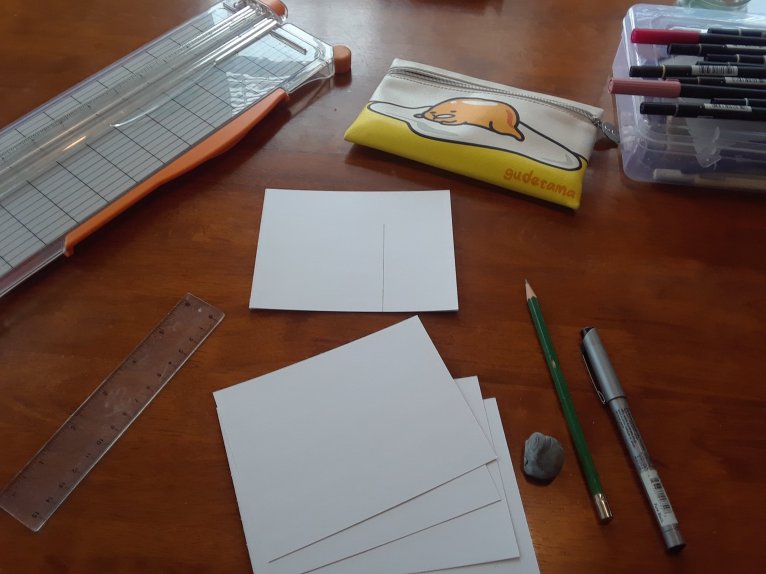 I really wanted a cutesy design, so I had planned to do peaches and write something about being “Peachy Keen,” but any theme or design will do. I had thought about doing “Egg-cellent” theme with different egg designs, but I didn’t know if others would like it as much as I did. Peaches it was, then! 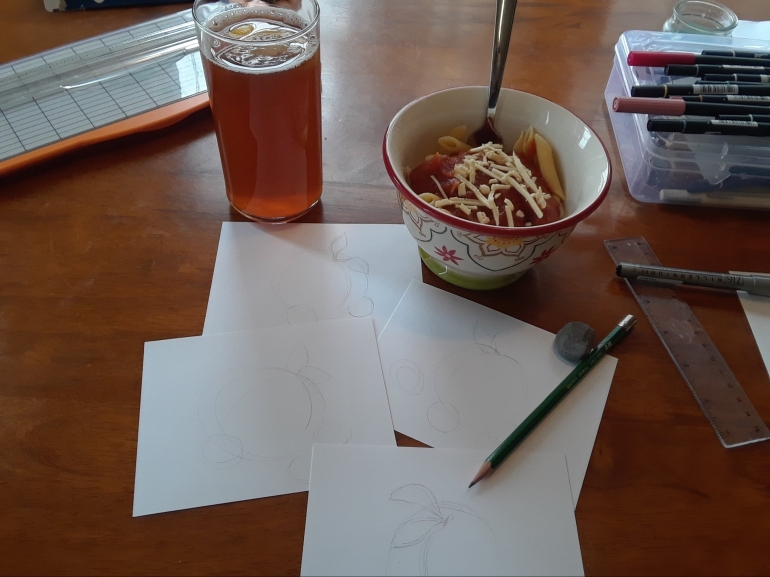 Begin to sketch out your designs and get a snack to keep you sustained. I highly recommend pasta with marinara sauce and vegan mozzarella cheese! I also enjoyed iced tea with Trader Joe’s ginger ale and sliced lemons.

Use pencil to lightly trace your designs. For peaches, a big circle with small leaves and a dimple is sufficient. You might add flowers as I did, or succulents, leaves, etc. 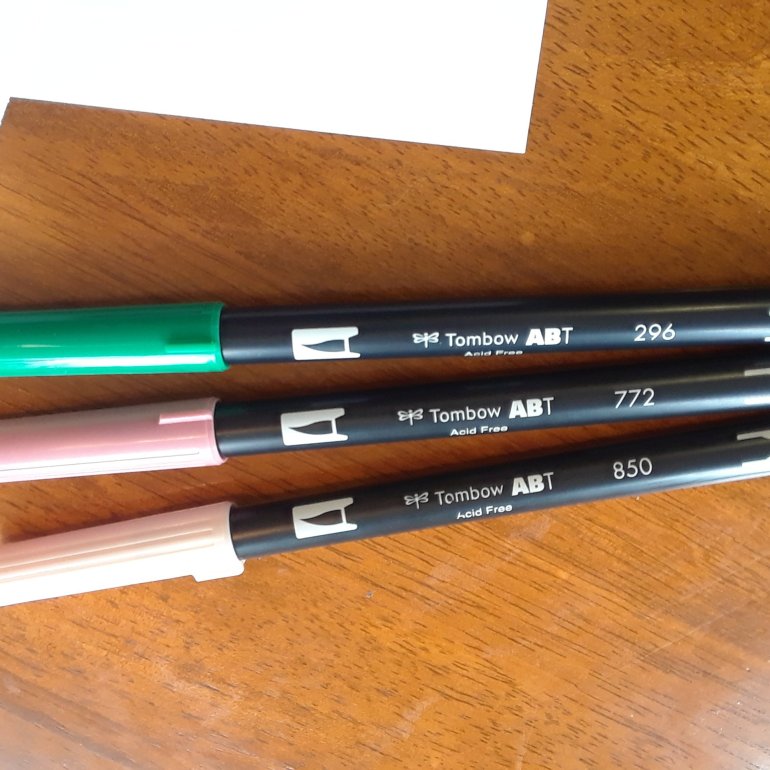 I chose to use my Tombow dual brush markers, but honestly the amount of water-based ink they give out was a little much for the paper I used, especially if I tried more than one layer of color. I had begun with a more intricate blended color, then had to keep it simpler as I went along because the paper was tearing on the surface.

Outline your shapes with a darker shade than what you will fill in with. This gives them a nice, natural look that is less bold than a black outline. Brown outlines are also nice and soft, if you want something that will stand out a little more.

I made the flowers with squiggly spirals began from the center and swirled outwards. I didn’t worry too much about them being perfect or all looking the same. I wanted them to be really unique! 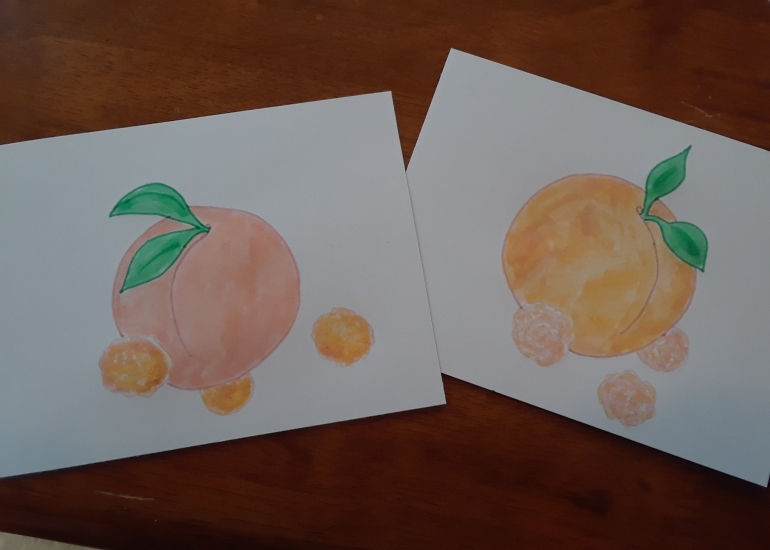 Next, color in your peaches with varying shades of pink, peach, and orange. Like I said, I tried to blend at first, but the paper was tearing. I used similar colors for the flowers, just coloring little squiggles a bit thicker than the ones I had outlined with. For the leaves, I added a thick smear of the darker green marker right in the middle of the leaves before quickly using a light, mint-green marker to fill them in. The Tombow markers naturally blend a little when the ink is still wet, so I tried to work quickly. 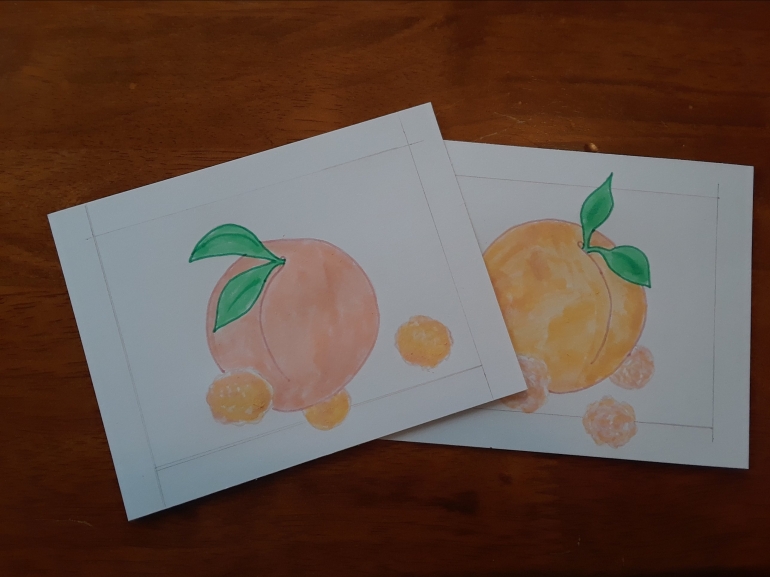 I also wanted to add a little border on the front of the cards since the cards is fairly simple, avoiding drawing over the existing designs. I measured 0.5″ in from the edges with my ruler and penciled the line in. I then used a pinkish-red Tombow marker to trace the line, making a little border around the postcards. I tried some thinner and some thicker, but I ended up preferring the look of the thicker line. I thought this gave a nice, more finished look to the cards.

The last step on the front was just adding the phrase “You are peachy keen.” My two go-to handwritten fonts are fully-lowercase cursive and fully-uppercase letters that are taller than they are thinner. I obviously went with the latter here, though I had played around with both ideas. The words aren’t perfectly aligned or sized because I was trying to hurry, but they still looked pretty nice. I also took kind of a crooked picture (sorry about that!).

I then turned the cards over to finish the back side. I made four lines, just eyeballing the space and using a ruler to create the straight edge. Finally, I wrote the greeting, filled in recipients and addresses, then added a stamp and sent them off!

That’s it! I didn’t really spend that much time on them, probably an hour or so, aside from getting a pasta snack! What did you do for Valentine’s?